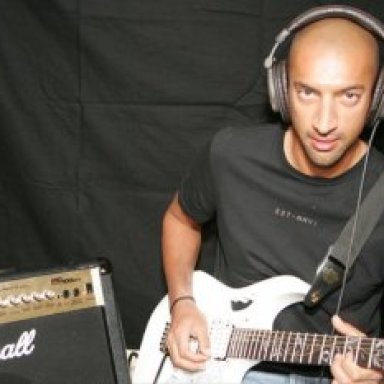 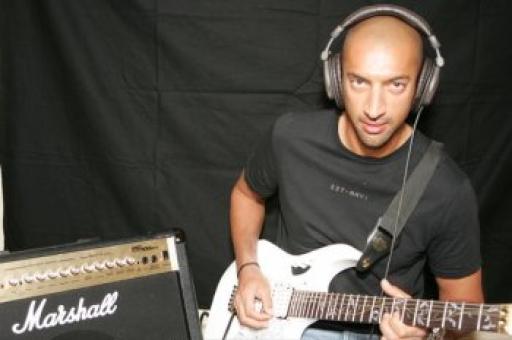 "Bridges,pickups flying through the air - he's a twister of talent shredding frets."

A Twister of Talent
Tornadoes are rare and powerful storms that sweep up everything in their path. They cause mere mortals to pause both in wonder and awe. All the ingredients must be present in just the right amounts and combinations to create such concentrated power. One instrumental rock guitarist has created a self-sustaining vortex of talent inside a power-filled and creative whirlwind. Arqum Iqbal is simply the "perfect storm" of talent with all the elements to cut a swath through the middle of rock music. If you want to storm chase Arqum's musical career, you'd have to start in the United Kingdom, for this twister has one long track. It began across the Atlantic Ocean, and headed due west, shredding frets.

From Out of `Donny'
Arqum was born in Doncaster, England, which is popularly called "Donny" by the local residents. His parents and surrounding family did not share his innate love of music; instead they tried to quell his interest in it. Iqbal states, "They thought music was a waste of time, they used to tell me to listen to it maybe an hour a day, and that was plenty." As is the case with many aspiring rock artists, Arqum would rebel against his parents' wishes, his love of music would remain, although it would slumber for a few more years.

Turbulent Clouds Form
By the age of fifteen, Arqum and his family had moved from England to USA, to settle in Wisconsin. This would be a turbulent time for Arqum, now a teenager, as his dreams began to finally take shape. In a new country with new friends he found himself at even greater odds with his parents' wishes to pursue his scholastic studies rather than music. His friends all played instruments, and Arqum's true love was music. Two life-changing events were about to occur to make his dreams possible. The death of his father was traumatic for Arqum and his family, and by the age of fifteen he had moved out of his parents' home. Now on his own, he was about to have a life changing event. It was out of turbulent storm clouds that a lightning bolt would strike and ignite his musical pathway.

Vai Lightning
In 1993 Arqum's friends dragged him to see Steve Vai perform at "The Rave" in Milwaukee. The concert changed his life in an instant. Arqum says, "It was the most amazing display of talent I had ever seen. I bought a guitar and amp for $100.00 the next day and started to teach myself how to play." From that point forward Iqbal had found his life's work. From that moment on he began to create unique music, not out of a desire to be famous, but out of a desire to be the best at his craft. The lightening had struck a chord and Arqum's "twister of talent" was now on course and would only grow stronger.

Winds of Influence
Steve Vai wasn't the only important influence on Arqum as he developed as an instrumental guitarist. Arqum's own rebellious spirit drew him to other artists that refused to conform to just be popular. One can hear the influence of guitarists such as Joe Satriani, Paul Gilbert and Marty Friedman within Arqum's work. They had a dramatic effect on him. Iqbal states, "They are brilliant artists that I marvel at, and their music will always be good during any era!" It was the timeless talent of these master guitarists that pushed Arqum onward towards creative perfection. He would approach his first apex of success as he released his first album, Jam Session.

Tearing up Tracks
Arqum's album is titled Jam Session by no accident. He believes it should be all about the music. He loves to perform, and has been performing professionally for over three years now, as an unsigned independent artist. For Iqbal, it's the feedback. Not from the guitar, feedback from the crowd! He loves to do something on the frets that everyone is impressed with - just as Steve Vai did for him earlier in his life. It's not about flaunting Arqum has a desire to get great rock music to the public again. This was the main goal of his debut album, and it has begun to sell all over the world. Iqbal says, "I really want to bring great guitar playing back to music. Music has been lacking talent over the past decade. It's no longer about talent and skill - I want to change that!"

Jam Session is definitely helping his cause to spread talent! The album contains all original tracks composed by Arqum, and additionally, he performs all instruments on the project. It has been his greatest musical accomplishment so far, and a cathartic release of creative energy. His songwriting is inspired by the loved ones around him, especially his wife Mai, and his newborn son, Arqum, Jr. Iqbal displays his ability to play fast and clean on Jam Session, with tunes that stand out as refreshing and unique.

An Instrumental, Stormy Story
The tracks within Jam Session seem to tell a story, without words like an instrumental journey through chapters of a book that is different for each listener. However, there's no doubt that power and craft emanate throughout the whole project. The album is more akin to one large event, one twister touching down rather than eleven separate tracks. The impending track "Intro" sets the stage for the speed and mood of the rest of the tracks. "Jam Session," the title track follows with a groovy, beat driven, action-filled guitar feast. Some quieter acoustic and mellow works can be found in "Budha's Dance," "Mai's Love For," and "Passion." These softer tracks create a sort of "eye of the storm" within Jam Session. It is Arqum's inherent ability to create an instrumental story within the album that he is most proud of.

Jam Session was recorded at Imperial Square Music Studios in Santa Fe Springs, California. While Arqum played all instruments and produced the album, he definitely had some talented help. Co-producers Joe Rullo and Keith Shamp added their talents in the studio and were a form of support for Arqum. He states, "They listened to my songs over and over again. we have a running joke that they have heard the song '140' over 140 times!"

The Twister Churns Onward
This storm of talent is far from over. With Jam Session now available worldwide, Arqum Iqbal plans to continue performing to support the album and work on new material. He pushes himself to excel with each new song. He would love to sign a deal with Steve Vai's label, Favored Nations. Until then he will continue to create wonder and awe with bridges, pickups flying through the air - he's a twister of talent shredding frets.
Arqum Iqbal Also On
Influences:
Steve Vai, Satriani